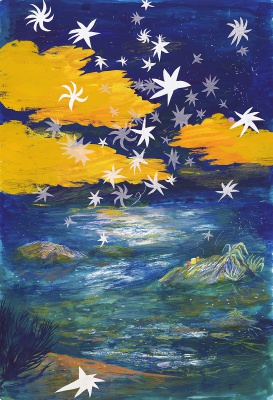 The pale baron is the great leader of the underwater state.  He always grabs the last piece, even before others have been served. He strongly dislikes poets, they mean all kinds of things between the lines, in white where nothing is written. This makes the baron feel very uncomfortable. Fortunately, Felix & Felka are not poets. They are singers....

Anna Vercammen is a theatre maker/musician who works for various companies. Together with Joeri Cnapelinckx and Sabien Clement, she created the much appreciated family show ‘De koningin is verdwenen’ (The Queen has Vanished) for KOPERGIETERY; followed soon after (this time with Dominique Collet) by the successful ‘Meisjes van Krijt’ (Girls of Chalk). Prior to that, she acted in the musical show ‘Gebroken Dromen’ (Broken Dreams, a co-production with Mambocito Mio). Anna has also appeared in shows by, amongst others, Hanneke Paauwe, Theater Zuidpool and Villanella. Together with Joeri Cnapelinckx she forms the duo behind the small-scale Dutch-language music project De Anale fase (The Anal Stage). During the 2021/2022 season she was artist in residence at Cultuurcentrum Brugge.