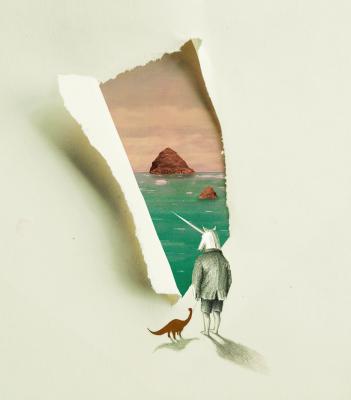 A reverse Big Bang. The Earth has been engulfed by plastic/heat/a nuclear disaster/a meteorite .… (fill in the dots). People have gone into hiding in the Earth’s inner core. A parallel universe. Something to do with quantum mechanics. The first human being comes back up to the surface through an intergalactic space tunnel. OUCH.

Is this livable? Can friendships develop there? Is it possible to feel at home in a place you don’t come from? Where the others aren’t like you? Where you don’t understand the world and it doesn’t understand you?

The Last Unicorn is an evocative and associative show about a unicorn, a dinosaur and an astronaut going through an identity crisis.

Lola Bogaert – one of today’s most talented young creators – has opted for a motley cast to make a show about the fundamental feeling of not belonging and the melancholy, sadness and most of all funny situations that come with it.

Theater maker Lola Bogaert regularly runs theatre workshops at KOPERGIETERY. She trained as a Drama Teacher at ArtEZ Arnhem after which she graduated as a Drama Director at the Brussels RITCS. After finishing two theses (Plethora and How to make a Living, under the wings of Beeldsmederij De Maan), she worked, amongst others, for Monty Kultuurfaktorij (Montignard project), joined the  breeding place that is Festival Boulevard, as well as Toneelgroep Maastricht’s Het LAB. She also took part in a research project at De Grote Post, together with d e t h e a t e r m a k e r,  on the theme of inclusion. Her research will yield a new theatre show for youngsters in 2019.

Dancer/designer Samuel Baidoo is the founder and artistic coordinator of the Antwerp multi-disciplinary art organization Hanafubuki. Having graduated as a Designer at Sint-Lucas Antwerp and a Sculptor at the Hoboken Art Academy, he took contemporary Dance classes at the Antwerp Conservatoire. He recently created Una Casa Cascata and FutariDe/WijTwee.

Sari Veroustraete obtained her Drama Degree at the Antwerp Conservatoire in 2014. Whilst doing a Masters she took part in the shows Deurdedeurdeur (SKaGeN) and De zaak van de dieren tegen de mensen (Dimitri Leue). In 2017 she was mainly active with socio-artistic Theater Tartaar. This season she can be seen in a show by Hanafubuki (Samuel Baidoo).

Dancer Krisztina Szirtes has taken classes in contempory dance, classical dance, yoga and various dance techniques/styles. She worked together with Lola Bogaert for her research project at De Grote Post as well as in her show Thumos (Amsterdam).